Watch or listen to this episode:

Over the years I've had to lead many software developers, and it's become much easier since letting go of being seen as "the expert". Even if I’m only leading a few people there’s always too much work and I have to choose really carefully what I do.

If you’ve watched any of my other videos you know I’m a big fan of teams where there’s less management. But whether someone is officially recognized as a “lead developer” or not, most teams usually have people on them who are more experienced. And people naturally seem to take ownership for areas of the product they’re most interested in and can start being seen as a leader around that idea. Maybe that’s you, or maybe you’re considering stepping into a role where you’ll be leading developers to do something with the software.

In my career I’ve found it’s really easy to get overwhelmed when I’m leading other developers. Meeting with the business, supporting developers, and still trying to get work done on the product myself can feel impossible. You’ve probably heard the saying “give someone a fish, feed them for a day. Teach someone to fish feed them for a lifetime”. But even though I know this, it can be hard to let other developers do more to help you if it’s going to take longer than just doing it yourself.

In this video, I share how I’ve had more time to support my team when I let other developers have more responsibility, and you can too.

How are you learning to let go when leading? Leave me a comment below.
​

They Watched Us With Webcams And Rewrote Our Code! 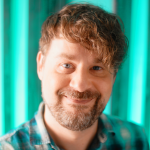 After working on over software 30 projects, I'm coaching developers to increase their worth, master consulting and persuasion, and keep growing!

Please log in again. The login page will open in a new tab. After logging in you can close it and return to this page.